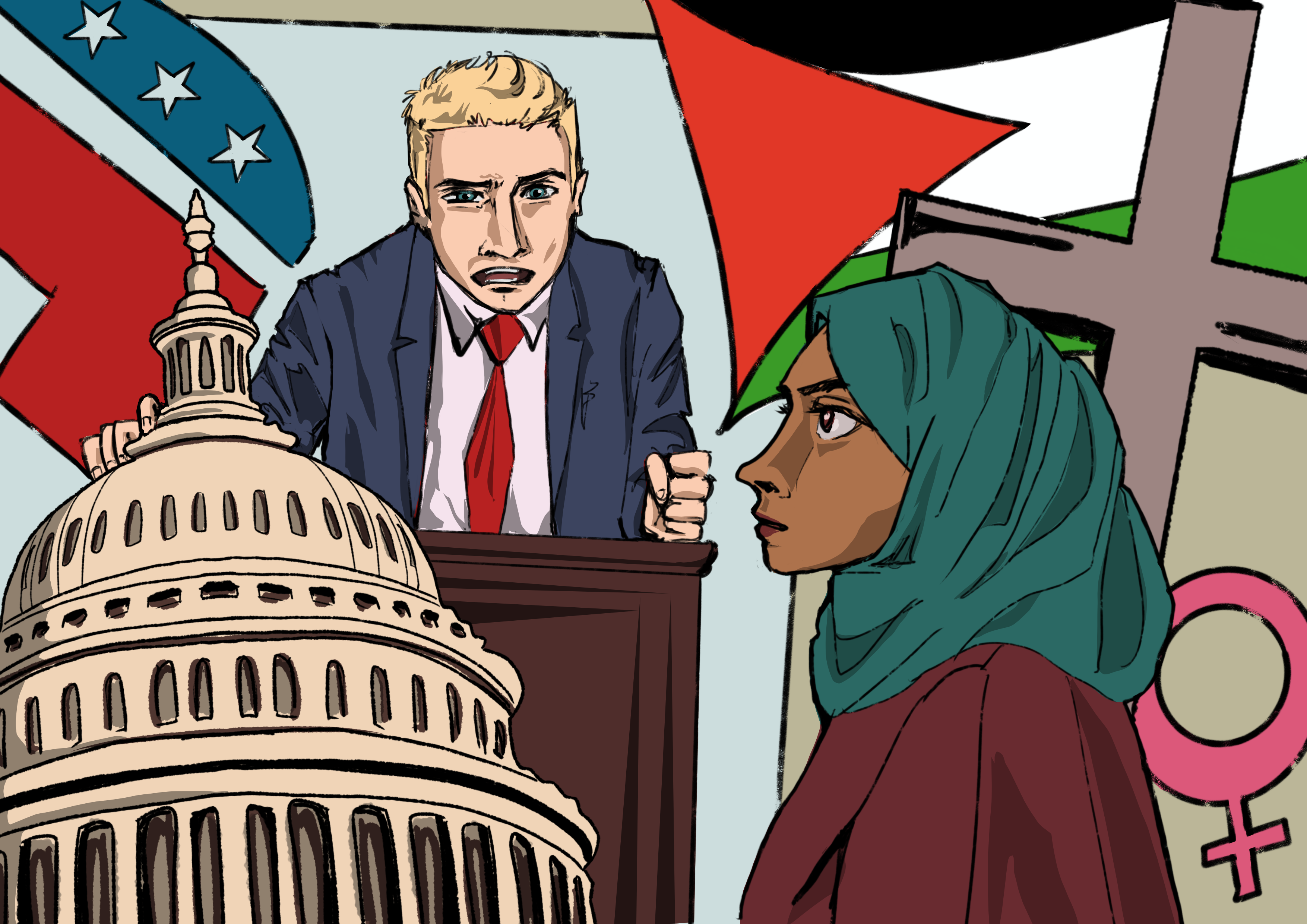 On 19 May 2021, Texas’ Republican Governor (Gov.) Greg Abbott signed the Texas Heartbeat Act (SB8) into law. At the ceremony, he remarked that “our creator endowed us with the right to life and yet millions of children lose their right to life every year because of abortion”. Later in December, the Supreme Court declined to block SB8 from being enforced.

SB8 prohibits abortion once a “fetal heartbeat” is detected, even in cases of rape and incest. It is the first law to effectively impose a ban on abortion past six weeks since Roe v. Wade, which aims at protecting women’s right to abortion, in 1973.

SB8 has received criticism since its enactment, including from Democratic politicians. For example, President Joe Biden stated that SB8 “blatantly violates the constitutional right [to abortion]”. On the other hand, protestors have compared the Texas administration to the government in The Handmaid’s Tale and the Taliban.

Feedback from the Republicans has been mixed. Some have avoided direct evaluation, like Virginia Gov. Glenn Youngkin (who prefers slackening abortion restrictions in cases of rape and incest). Others have reacted adversely, like Maine Senator Susan Collins (who sees SB8 as “extreme and harmful”).

SB8 is, however, not without Republican backing. Texas Senator Ted Cruz was proud that Texas was leading pro-life efforts, adding that “every life is a gift from God, and without life, there is no liberty”. South Dakota Gov. Kristi Noem expressed a desire to “make sure we have the strongest pro-life laws” by learning from Texas’ regulations. In Florida, where the House has introduced a similar bill, Speaker Chris Sprowls reaffirmed his objective to fight “for unborn babies and their right to life”. Other states whose Republican parties have considered introducing related legislation or have already done so include Ohio, Alabama, Indiana and Mississippi.

Upon examining the approval SB8 has obtained, two observations arise.

First, most arguments involve the concept of sacred and God-given life. Several branches of Christianity, including the Roman Catholic Church and some evangelical movements, share this firm stance. Hence, the Republicans have tried tactics that shape attitudes towards abortion to gain their support. Most notably, the Republicans adopted strong anti-abortion views and openly voiced their approval of Christian campaigns with such goals in 1972. As a result, they attracted the votes of previously Democratic Catholics and Southerners antagonised by their liberal social program in the Presidential Election, contributing to Richard Nixon’s victorious election. Indeed, scholars have argued that abortion did not play the most significant role in Nixon’s re-election. However, the issue did contribute to modelling the Republican Party into a guardian of conservative values.

Second, most of the above supporters of SB8 are also supporters of former President Donald Trump, the representative figure of hardline conservatism in the USA today. Moreover, these individuals’ stances on critical social issues in the USA match Trump's. The Abbott-led Texas state declined refugee resettlement in 2020 after Trump, an outspoken critic of refugee asylum policies, allowed states to exit the federal resettlement program. Cruz, who shares Trump’s stance towards vaccine mandates, voiced his support for NBA players refusing to take the vaccine, like Kyrie Irving and Andrew Wiggins. Noem’s opposition towards cannabis legalisation, including the removal of medical marijuana protections, aligns with Trump's policies as well. In recent years, it seems that these politicians are forming a bloc of hardline conservatives, determined to defend the “way of life” in America.

Consequently, the question of what role religious faith plays in the political agenda of the States’ hardline conservatives arises. First, the Christian faith is at the heart of social conservatism. The various teachings of certain Christian factions revolve around stability and moral decency in life. This is significant because the USA is a socially fluid nation. Over the years, people of different ethnic and cultural origins have gone to the States, leading to an ever-changing and diverse social structure. Unavoidably, this antagonises people who believe external influences threaten their values. Hence, they are easily influenced by such religious beliefs. Such a phenomenon gained momentum in the 1960s, coinciding with John F. Kennedy and Lyndon B. Johnson’s pushing for social liberalist policies.

Meanwhile, the distinction between religious and political affiliation has increasingly been blurred. This was already observable from the Republicans’ political strategy before the 1972 Election. Hardline conservatives are also using religious arguments to back their political views. These public displays effectively solidify the position of religious faith as a cornerstone of conservative ideology. Moreover, the emphasis Christianity puts on morals gives social conservatives greater self-confidence in their pursuits. Such a mentality is crucial in political success. Furthermore, such modelling makes the conservative faction more attractive to certain social groups.

However, what is helpful for the conservative political mission may not benefit the whole nation. This has been shown in two ways.

First, political figures may use religious arguments to support aggressive action against other socio-political groups. This is especially the case for Christianity. The Crusades led to millions of deaths based on a Catholic argument of eradicating the Muslims from geographical Palestine. Experts have commented on the role of Christianity in justifying colonialism by European powers since the 15th century, which was packaged as spiritually liberating foreigners from demonic cultural forces. English Archbishop Robert Runcie argued that the Nazis used famous priest Martin Luther’s antisemitic views as moral backing for the Holocaust. The issue of abortion, of course, does not possess the black-and-white moral status that the previous examples have. However, if hardline conservative forces were to expand religious arguments to suppress other constitutional rights and freedoms, religious faith would become a tool for tyrannic politics.

Second, religious affiliation is a catalyst for political friction. A key characteristic of religion is its exclusiveness: it accepts those with identical beliefs about life as family and distinguishes itself from disagreeing entities. Given this, it is challenging for groups with different faiths to reach compromises on controversial matters. Specifically, in the USA, the strengthening of the Christian identity in socially conservative ideology is harmful. As a country that places great importance on issues of democracy and freedom, civil rights are central to political discussions. Hence, the religious nature of political belief may spark hatred in society as the rigid moral beliefs of religious actors are violated. These attitudes may extend to other issues, where groups cannot compromise because they fundamentally disagree on unrelated issues. This leads to the risk of political conflict that threatens national stability. Under the context of the COVID-19 pandemic and climate change leading to a need for quick solutions to various problems, the USA must halt this phenomenon at all costs.

Ensuring that politics is more secular may be a viable way out. Michael Nugent, an Irish writer, has argued that secular states better respect individual rights and freedoms and allow more room for tolerance and rationality. All these contribute to reduced political friction and more opportunities for compromise. The USA does not have an official state religion, but it would benefit from a more secular political landscape. It is, however, impossible to regulate religious expression in speech and actions by politicians, since it would be a violation of their freedom of religious belief. Hence, the only solution is for the States’ hardline conservatives to realise this: religious politics does no good for anyone, including themselves.