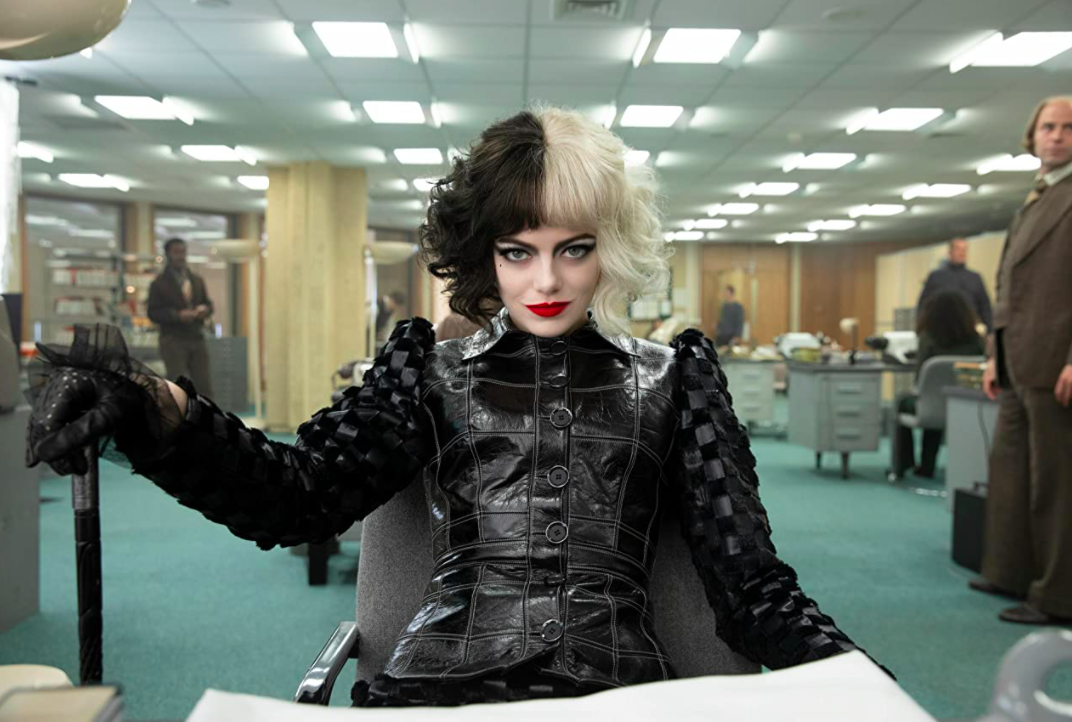 “I like to say that ‘normal’ is the cruellest insult” - Artie, Cruella.

Said to be Disney’s ‘first openly gay character’, Artie is not only played by the openly gay British actor John McCrea, but also pays homage to the gender-bending and sexually fluid rock musician David Bowie. But is Artie really queer, or does he just hate being 'normal'?

In this essay, I will dive into the gay representation in Disney movies in recent years using Cruella as a case study. More importantly, the question of whether Disney’s inclusion of the gay character Artie is a step forward in its LGBTQ+ representation or just queerbaiting will be explored.

In case anyone is not familiar with the movie, Cruella is intended to tell the origin of Cruella de Vil, the fur coat-obsessed villain in 101 Dalmatians. The aesthetics of the animated 1961 movie captures many audiences, but the plot and characterization...allow me to say, are cliché and stereotypical.

In 101 Dalmatians (1961), the lonely Dalmatian Pongo is tired of his bachelor-dog life, so he maneuvers his master Roger into meeting Anita, his crush Dalmatian Perdita’s owner. The two owners meet at the park, accidentally fall into the pond and get thoroughly wet. By some goodwill of destiny, the two fall in love instantaneously after the silly incident, and soon get married. With Roger being the protective and affectionate husband and Anita being the obedient housewife, the tale of 101 Dalmatians begins. Although the relationship of the couple isn’t the main focus of the story, it’s fair to say that such depiction is rather oversimplified and romanticized. These stereotypes are common in the 60s as well.

Obviously, the modern adaptation should, and does, do a much better job in terms of giving a more diverse and inclusive representation. Focusing on today’s discussion about gay representation, the gay character Artie is not in the original novel, nor the 1961 movie. This newly invented character puts forward the question - is Disney just creating the character for the sake of appealing to LGBTQ+ audiences to earn the ‘pink dollar’?

Queerbaiting - What is it and why is it problematic?

According to Urban Dictionary, queerbaiting is a marketing technique where producers paint a character as possibly queer to satisfy queer audiences, but never explicitly say that the character is so. This is in order to retain heterosexual audience, or even audience who oppose the LGBTQ+ community. Queerbaiting is not uncommon in the entertainment and film industry. Despite increasing acceptance of and self-identification with the LGBTQ+ community (a Gallup poll conducted in 2020 found that more American adults are identifying themselves as lesbian, gay, bisexual and transgender than ever before), the fact remains that as of 2020, 86.7% of Americans still identify themselves as straight. In order to appeal to this group of heterosexual audience (and avoid potential backlash from homophobic markets), while satisfying the demand for greater inclusivity and diversity in movies, producers ‘bait’ the LGBTQ+ community in order to maximize profits.

Queerbaiting is problematic in several ways. The most obvious problem lies in the commercialization of the LGBTQ+ culture. The community is meant to be an inclusive space for non-heterosexual and queer individuals, often discriminated against or ostracized by society. However, producers are monetizing and taking advantage of space without a genuine interest in supporting the LGBTQ+ community. Others may think that a lack of real representation signals LGBTQ+ characters are still less valuable or second-rate to the mainstream heterosexual characters, undermining the community as a whole.

We can use Beauty and the Beast (2017), the live-action remake of the classic tale, as an example. At the time, director Bill Condon announced that Le Fou, played by Josh Gad, would be portrayed as a gay man. In case you have no idea who Le fou is, he is Gastone’s bumbling sidekick and sings a whole song praising how Gaston is “everyone's favourite guy” and how “Every guy here'd love to be [him]” in the movie. Yet, despite Disney’s claim and his idolization of Gaston, there is nothing in the movie that confirms his gender identity or sexual orientation.

Every time Disney supposedly includes a queer character, any evidence of said queer identity can be easily missed or misconstrued. It’s either a blink-and-you'll-miss-it scene or an exceedingly subtle reference that is barely noticeable to the audience. The ‘first gay character’ claim is a “tale as old as time”. It’s no surprise if Artie is just Cruella’s sidekick and another proliferation of Disney’s mounting ‘first gay character’.

Going into the crux of the debate, contrary to Disney’s promise of bringing us an ‘openly gay character’, some think that Artie’s portrayal is rather ambiguous and queer-coded.

The term queer-coding is used to describe characters who are given traits to suggest they are not heterosexual or cisgender, without the characters explicitly confirming a queer identity. In Artie’s case, this ambiguous queerness is mostly expressed through his 1970s London glam rock fashion. Although his wardrobe blurs the line between masculinity and femininity, it can easily be read as a fashion style that many non-queer or straight people adopt. In another instance, to Cruella’s question of how his outfit is viewed in the public eye, Artie’s response - “Some insults and abuse. But I like to say that ‘normal’ is the cruellest insult of them all.” - is not particularly explicit about his queerness. While it can be interpreted as a vague allusion to homophobic experiences, it is focusing primarily on the fashion style. Moreover, a disinclination towards being seen as ‘normal’ is not at all a representation of queerness, similar to how the description of ‘being basic’ or ‘the normies’ are used in a derogatory sense these days. It’s no wonder why audiences who have been anticipating an ‘openly gay character’ are disappointed, or even accuse the production of queerbaiting.

That being said, some argue that the ambiguity in Artie’s character does not undermine LGBTQ+ representation. Quite the opposite, on a broader level, Artie’s queer personality (not necessarily in terms of sexuality or gender orientation) gives a sense of universality and relates to those who are not mainstream or are deemed ‘alternative’ in society. This is in line with Cruella’s characterization in the movie as well. Growing up as a social outcast “being brilliant, born bad, and a little mad”, Cruella’s character speaks to the queer experience. Similar to many outcasts, it’s nothing new that members of the LGBTQ+ community quite face criticism and exclusion from society. Thus Cruella and Artie, in this broader sense, speak the same language as the LGBTQ+ community.

Furthermore, John McCrea, the openly gay British actor playing Artie in Cruella, reveals in an interview with Gay Times that Artie was “originally a ‘drag queen’ in one of the first scripts”. A drag queen is a person, usually male, who uses clothing and makeup to imitate and often exaggerate female gender signifiers for entertainment purposes. “But then, the idea changed later on because everyone realized it’s a lifestyle choice for him - it’s not a performance,” he clarified. Although this change may not be directly perceived by the audience, it is indeed significant to the LGBTQ+ representation. It suggests that queerness is not something facetious or a temporary phase - as claimed by many parents who belittle their children’s queerness when they first come out. Rather, it reflects that queerness is an identity, a personality trait, a way of living outside what society mandates.

This sense of queerness is further highlighted by the conception of the Artie as a homage to the gender-bending musician and sexually fluid musician David Bowie. David Bowie’s glam rock music, as the forerunner of a broader goth subculture, reflects the musician’s own uniqueness and queerness. Although the goth subculture does not equate to gay representation, they carry the same idea behind - being different. Characterized by its emphasis on individualism and acceptance towards alternative styles or even personalities, the emergence of the goth subculture harmonizes with the queerness of the LGBTQ+ community.

The importance of LGBTQ+ representation in Disney movies

To a lot of kids, myself included, Disney movies are the first school of the world that exists outside of our daily lives. Whether it’s as imaginative and fantasized as Alice in Wonderland, or something darker and more cynical like Cruella, Disney movies allow young children to have a peek at a different world that they have never experienced, or even known of. This is not saying that a sunshine-unicorn-and-rainbow Disney movie is bad, but Disney movies should not only be showing naïve and simplified portrayals of a fantasized world. Rather, moral messages and real-life struggles should be told through a fictional lens, such as that in Cruella. Thus, the inclusion of gay representation is particularly important in Disney movies, as values and perspectives of children are subliminally influenced by, or even shaped through these movies. Therefore, integrating gay representation in Disney movies is the first step to embracing the LGBTQ+ community.

While there is still room for improvement, I think Cruella’s debut is a step forward for Disney, particularly when compared to previous attempts of LGBTQ+ representation. I can see that Disney is on the right path towards more inclusive representation of the LGBTQ+ community.

At the end of the day, only Disney executives know whether their move towards queer representation is authentic and sincere. What we can do as audience members - and as consumers - is to point out the imperfections and call attention to potential instances of queerbaiting. That way, we might be able to improve LGBTQ+ representation - particularly important given the roles of these movies in subliminally shaping the values of their young audience.