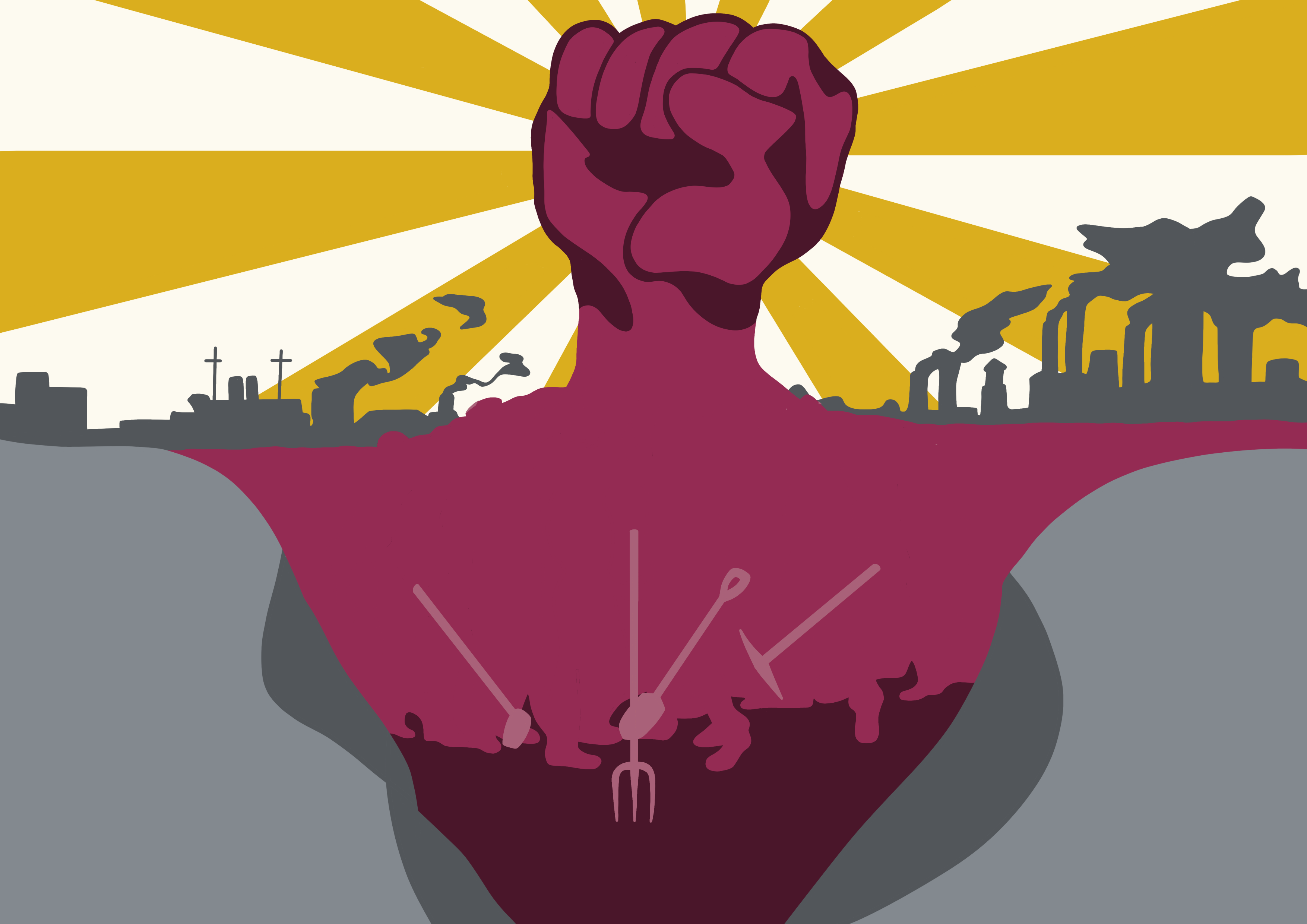 Labor unions are often derided by detractors as an anachronism. The irony of this is that – in an era of burgeoning inequality and a falling labour share across the developed world – they’re arguably more relevant than ever.

The evidence supports this notion. A 2018 study from Princeton University notes that union activism in the United States has played a key role in equalizing the labor income distribution, not just through demands for higher wages, but also due to efforts to limit excessive executive pay. The Economic Policy Institute has something similar to say; as the tidal wave of neoliberalism swept through the developed world during the 70s and 80s, state intervention was successful as crushing union power; their data suggests that the resulting deunionisation has accounted for almost 1/3 of the subsequent rise of male wage inequality.

Unions also play a huge role in bolstering the political capital of workers, pressuring the state to implement worker-friendly, inequality-reducing reforms. They’ve historically been fundamental to the passage of redistributive policies, such as minimum wage laws and the establishment of the Social Security Administration in America. They also empower workers by fostering greater participation in the political process; data suggests that union members are significantly more likely to vote than non-union members. Finally, their fostering of class consciousness provides a useful bulwark against the race-baiting, demagogic populist right, which often masquerades as being worker-friendly whilst simultaneously seeking to maintain oppressive power relations that shackle working-class people.

So, what could our government do to revitalize this crucial institution? For one, they could institute a Collective Bargaining Law, guaranteeing that employers would be legally mandated to negotiate with workers. Efforts to encourage collective bargaining at the sectoral rather than the enterprise level would also be worthwhile. Sectoral-level bargaining is typically associated with higher worker coverage in pay agreements and prevents low-wage paying firms from undercutting others that compensate their workers fairly. New Zealand’s “Fair Pay Agreement” system is a striking example of how this could be done.

All in all, unions are a sine qua non if we are to tackle inequality. They enhance worker bargaining power and provide the necessary political capital for the implementation of wider-reaching reforms. Hence, it is crucial that governments take the aforementioned steps to restore their rightful role in society.

Income inequality has become a more present issue in the 21st century due to the effects of the Global Financial Crash and the COVID-19 pandemic, and it has resulted in record inequality that politicians seem to want to further. We don’t have to go down this path, but let’s talk about the economic rationale behind it.

After the Great Depression, John Maynard Keynes came up with Keynesian economics, which emphasised the necessary role of the government to intervene in macroeconomic policies. Some important principles were that fiscal policy could be used to counter inflation, and that the imposition or cutting of taxes could reduce or increase economic growth respectively. This was the standard form of economics throughout the 1950s and 60s, which combined with a jobs guarantee to create very low unemployment of 2%.

This actually worked remarkably well, and countered inflation when it arose. One of the more extreme examples of this policy working was in Australia in 1951, when inflation hit 15%. The government imposed tax raises on income, corporates and tariffs to increase the supply entering the government, and created a surplus budget to take money out of the economy to counter inflation. The result was a decrease in inflation back to normal levels, with the maintenance of unemployment at 2%. That unemployment rate causes great positive spillovers for society, including higher wages and the rising living standard of millions. Job guarantee offices ensured that supply met demand for labor, and made the economy more efficient.

In the 1970s, that all changed with stagflation. As the oil shocks crippled supply chains, and caused more unemployment and inflation, economists like Hayek and Friedman established the idea that the government should not make policies to control inflation, and that it should be controlled by the central bank. With this came other ideas that would increase income inequality overtime to even greater heights in the 21st century, including a ‘natural’ rate of unemployment, trickle-down economics and the encouragement of reduced regulations.

Neoclassical policies have shaped governments to become institutions that cut social security for those unemployed further and further, and that keep giving concessions for capital gains over and over again, which perpetuates the further gap between rich and poor, and incentivises inefficient resource allocation, especially in the housing sector. Trickle-down economics has no shred of evidence to work in favour of the poor, due to rich people generally spending more of their income on luxury foreign goods rather than domestic goods. We continue to rely on and focus on Gross Domestic Product, which encourages mindless consumption rather than an efficient economy that is beneficial to all.

Instead, we rely on the forces of the ‘free’ market, which allows for companies to create monopolies and oligopolies, and for the minimal regulation of dangerous goods that have negative costs on human health. It encourages the distribution of dividends to the top few, instead of increasing the welfare of the many. The reserve banks, which are often led by former employees of financial companies, create policies in richer company’s interests, and are not accountable to the people. To fight inequality, we must have cooperation between the monetary policy of the reserve bank and the fiscal policy of the government to maintain inflation at low rates, whilst closing the gap between rich and poor.

Despite many politicians and activists calling for the redistribution of wealth and reduced inequalities, its implementation is quixotic at best and may be frivolous. For the former, the implementation of progressive tax policies will face discontent in the legislature. For example, the comparatively moderate tax plan headed by the Biden administration now faces headwinds even in a democratic congress.

By intuition, the redistribution of wealth is analogous to socialism. Nordic countries are seen as the paragon of equality and prosperity, however, it could not be ignored that they possess lackluster productivity and are inefficient. It limits the amount of money to the individual and distributes it to the government, which is susceptible to government failure and political caprices. Even if it functions in Nordic countries, it is not indicative that it could be utilized elsewhere with discrete values and systems such as Britain and America.

Speaking of government failure, it necessitates exploring the nature of governance. In the principles of Keynesian economics, the government needs to be magnanimous and do not have self-interests. However, this is seldom the case. Politicians need to be elected, and sometimes make populist agendas that are deleterious to the wider economy. Furthermore, the government is one entity and consumers millions. It is improbable for governments to properly reflect the market’s demands just like private individuals. This causes rump state-owned enterprises such as Chinese banks and Amtrak - unprofitable and inefficient yet cannot be shut down. Moreover, letting governments interfere with the economy may emasculate freedom, as reflected in Hayak’s book the Road to Serfdom. It simply replaces a competitive market with a government monopoly that also has desires.

Many critics of tax cuts for the wealthy argue that inequality will increase and there is limited evidence that it will benefit the middle class. Although income inequality did rise and wages did fall, other metrics also need to be considered. At the start of the Reagan administration, the unemployment rate was at 7.2% while experiencing stagflation and GDP was experiencing negative growth. At its end, the unemployment rate was at 5.3% (23% decrease) and GDP was experiencing annual growth of 4.2%.

Progressives strive for equality, yet it is neither probable nor necessary. Thatcher once challenged her Labor counterpart whether he wanted the “poor to be poorer provided that the rich have money”. Milton Friedman also famously said that “a society that puts equality over freedom will end up with neither.” Despite many criticisms of capitalism for causing inequality, it is not the Achilles heel, yet necessary evil.